Face: Since Maria Montez's skin is warm-toned and not too pale, I used my CC cream from Lumene instead of my usual cool-toned fair foundation to even out the skintone. I have the "light" colour (there are only two to choose from), which is sort of beige and darker than my natural skintone, but works for summer. (Though the colours are so washed out in the bright daylight that my skin looks completely white anyway!) I use it because I bought it and because it has sunscreen, but the texture is really too dry and cakey and emphasises the fine lines in my face. I'd hoped it would be more moisturising and suit my dry skin better. Perhaps I should try their BB cream instead, but there the "light" colour is a way too dark brownish pink that would look like fake tan on me.

Blusher: I applied a coral red blusher (from Sleek's "Lace" trio) on a large area of my cheeks, almost all the way down to the jawline and further in towards the nose than I would normally do. Blusher wasn't really used to sculpt the face in the 40s but just to give a wash of colour more like a natural blush.

Lips: I used lipliner to draw slightly outside the lines, mainly to rounden my angular cupid's bow and then filled in the lips with "Cardinal" from Nivea. I don't think Nivea makes makeup anymore but it's just another neutral bright red, a little less warm-toned and tomato-red than the one Maria Montez wears.

Eyebrows: I would have to shave off my brows and draw them back in much higher to get the same shape as Maria Montez! Instead, I just slightly exaggerated and rounded the arch and added that little upwards wing toward the temples. This particular brow shape had its own name  - the "Mandarine Brow".

Eyes: The eyeshadow is really minimal, the only thing I could detect in the reference picture was a fake globe line drawn in very high, starting close to the inner end of the eyebrows, in a neutral shade. I imitated this and also used a nude matte shadow to even out the skintone and cover the veins on my eyelids. Maria Montez is obviously wearing fake lashes both above and below her eyes, but I just curled my lashes and put on some black mascara. Since my lashes are very blond and sparse, I also used a felt-tipped black eyeliner to draw a very fine line as close to the roots of the lashes as I could, in order to emulate that well-defined lashline you get when you wear a strip of fake lashes. In retrospect, I think the line under my eyes was a bit much.

Despite actually using it for this look, I don't think black eyeliner belongs in a typical 40s makeup. I've seen far too many "40s" makeups that were really 50s makeups with winged black eyeliner! Even in the 50s, they more often used dark brown or grey pencil than pitch-black liquid eyeliner. You sometimes see genuine 40s makeups where there's an eyeliner line on top of the lashes, but that's never black, always some softer colour like bronze or taupe and probably done with eyeshadow. The thin black line you can quite often detect in 40s pictures is probably just the base of the false lashes, or retouch. Unlike in the reference picture below, the lower lid and lashline is most often left completely bare. In fact, for a more ordinary or everyday 40s look the best thing is to not use any eye makeup at all. Yes, I know, it might feel weird in this day and age when mascara is the default for even a "natural" "un-made-up" look, but in the 40s lipstick was the default makeup item. The best and easiest 40s look is this: do your hair and put on some lipstick and perhaps a bit of powder - done! If you want to use mascara, avoid volume mascara at all costs since glamorous 40s lashes were long but never very thick. 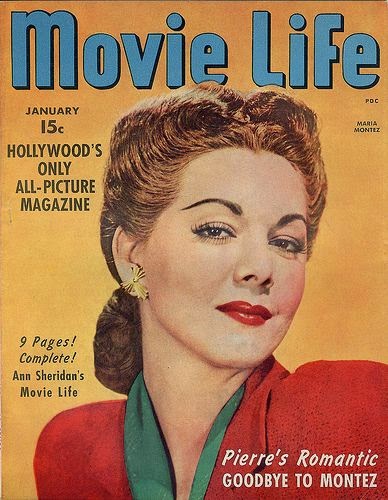