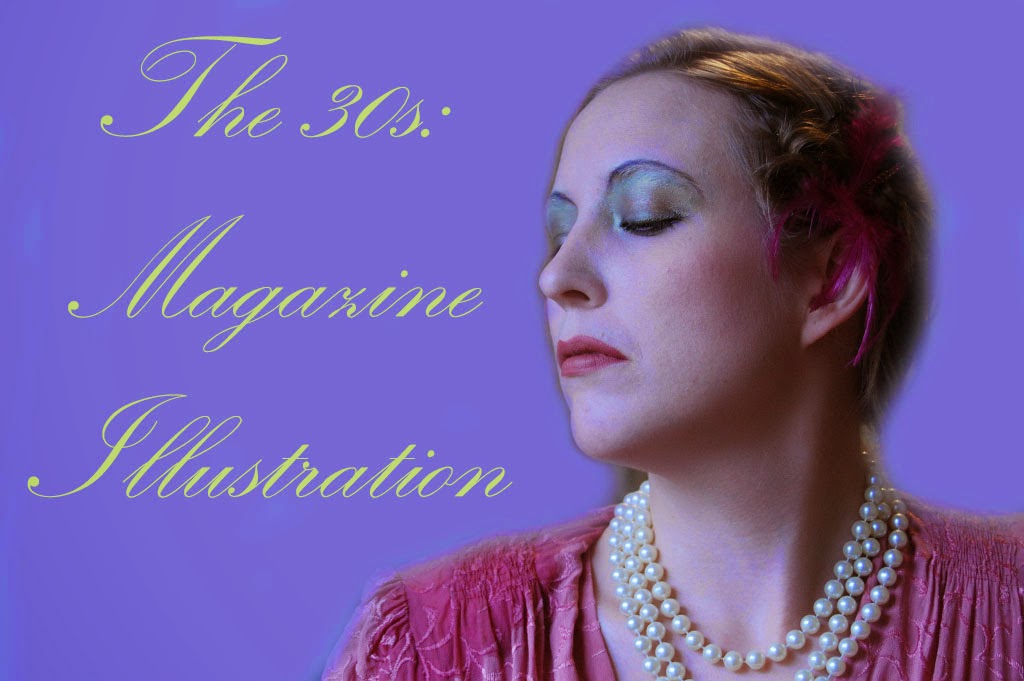 I had to resort to a painted picture as my reference picture for a 30s makeup since colour photos from the 30s are rare and hand-tinted, which amounts to the same thing as painted anyway. I'm not sure where the picture I chose is from, but I'm guessing the cover of a ladies' magazine.

Face: I used a fair, cool-toned foundation for that porcelain-pale look. Powder in the 30s generally just came in one colour: ivory.

Blusher: I applied a cool pink blusher sheerly on a quite large and round area of my cheeks, not using the blusher to sculpt my cheeks at all.

Eyebrows: 30s eyebrows were pencilled in extremely thin and generally in a big round arch, though sometimes straight or in a more elfin shape up towards the temples. Of course a lot of people wore their natural eyebrows as well, particularly girls and young women with a more "sporty" look. But the typical glamorous film star look in the 30s were to shave or pluck off your natural eyebrows completely and pencil them back in higher than natural. I didn't properly cover or shave off my eyebrows, I just drew in new ones on top with dark brown eyebrow pencil, so it looks quite weird. Apart from drawing in the arch above my natural one, I also prolonged both ends of the eyebrows downwards for almost a semi-circle shape.

Eyes: They really liked glossy eyelids in the 30s and used vaseline either on its own or mixed with some eyeshadow in a neutral shade like brown. I mixed vaseline with golden-green shimmer eyeshadow, but I think I got both the hue and the proportions wrong compared to the reference picture. I should have used more vaseline and less eyeshadow, and I should have picked a less green colour. I think a gold or bronze with just a subtle undertone of olive, khaki, beige or even dove grey would be a closer match. Also, I should have blended the eyeshadow and not applied it all the way up to the painted-on eyebrows, but I did it in order to cover up my real eyebrows a bit.
I then applied black pencil eyeliner quite thickly and not too neatly all around my eyes and smudged/blended it a bit, and finished by packing on mascara on both my upper and my lower lashes. I think the general messiness of the eye makeup is quite true of the 30s, when most makeup came in stick or cake form and was applied with the fingers. Precision tools like brushes weren't really invented yet, or if they were, only professional makeup artists used them.

Lips: Using a pink lip liner, I slightly overdrew my upper lip, rounding my cupid's bow outwards and drawing in the upper lip slightly fuller all the way to the corners or the mouth. I then filled it in with Nyx "Euro trash", a toned-down warm pink, almost a neutral. Not all 30s lips were dark and dramatic! 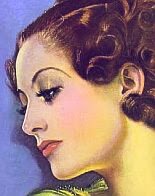